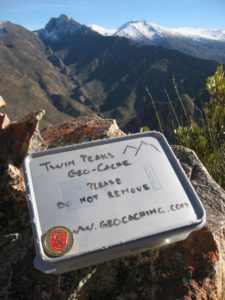 This is pretty much how it feels for some 3 million people around the world every weekend, off day or whenever they have a free minute to head out into the woods, hills, malls – yes, even the malls.

Armed with a GPS (Global Positioning System device) or a mobile app and a Waypoint downloaded from the internet, they are poisoned to find a little box, as small as the dice, but more often the size of a 35mm firm container or a lunch box sized Tupperware container containing a logbook and sometime even some additional items for swopping. These boxes called Geocaches with names like Under Pressure 2, Disconnected, or A bridge too Far, are hidden in the most unusual places, under park benches, in trees, on mountain tops, or in private post-boxes or under garden gnomes or rock piles. 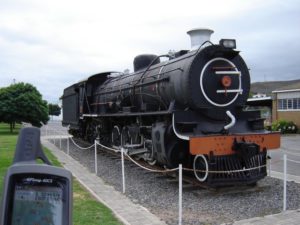 Currently there are over 2,5million caches hidden in 180 countries all over the whole world, 12’000 alone in SA, ~40 in and around Montagu. The game is called Geocaching and started in 2000 with the opening of the American GPS satellite system to the general public.

The first geocaches were simple sturdy ammo-boxes and over the years people downsized them to tiny containers called NANO caches, suitable to be hidden in heavy traffic areas like shopping malls, restaurants or bus and train stations. Other caches were so big they needed no log book, but a confirming photograph of the Geocacher in front of the object like a geological formation and then called EARTH cache. These caches are often very educational, as are those placed at historical monuments or plaques. Did you know for instance that Montagu has at least 5 Boer war forts and where they are – Geocachers know! The caches are placed by the players themselves under strict rules, with great respect to the environment and permission of the landowners. 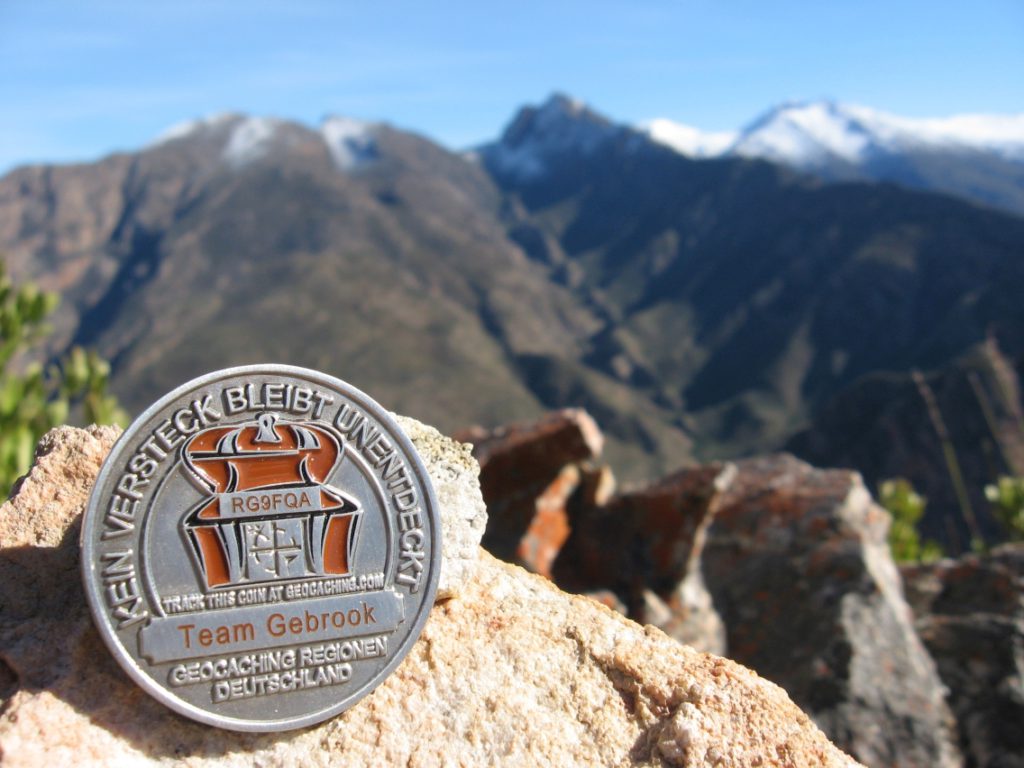 Sometime you might even find a GeoCoin (see above) or a Travelling Bug (TB) in the cache, those are traceable items which players released into the game to travel the world, some time with a dedicated mission like: Visit mountain summit caches all over

the world, YES even Mt.Everest has a cache right on top, called: “Earth’s Roof – Mount Everest Peak”. Our personal Geocoin made it all the way to the Ramat Razi’el in the Judean Mountains before getting lost back in 2011… another TB called “s’ Geise Glöggli – The Bell” travelled 37334.5km so far and is currently in North Carolina.

The 16th of August is International Geocaching Day, for more info on this awesome treasure hunt visit Geocaching.com In their own words: “People geocache because it’s a way to explore the world around them with friends and family and because it’s fun. Geocaching is a free game that reveals a world beyond the everyday.” 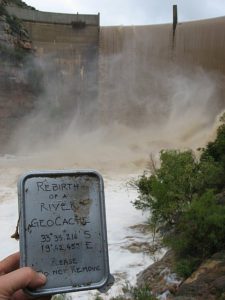 SO, if you love to spend a whole weekend geocaching and never step into your car, head for Simonskloof, we currently have 10 caches within our boundaries and another 8 within easy reach.